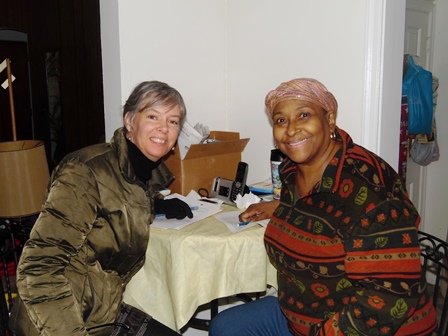 As a third generation Baltimore community leader and advocate, Ms. B. is no stranger to the challenges our community faces, especially seniors. Ms. B. has previously served on the 45th Legislative District of Maryland, has been voted “Mother of the Year” twice in Baltimore City (along with countless other awards) and has a street named after her in honor of her service to the community.

When Ms. B.’s health began to decline, she reached out to community resources to see what help would be available to her in making minor repairs and modifications to her home. That’s when she found the HUBS Program at St. Ambrose.

As part of the HUBS services we deliver, St. Ambrose helped Ms. B receive home modifications through Civic Works Cities for All Ages Program. Ms. B. has had her front walkway fixed, exterior rail at rear entrance installed,motion light at top of basement stairs installed, grab bar in bathroom installed in addition to other minor modifications and repairs.

Ms. B. recalled, “I became familiar with HUBS due to my health challenges that caused me to be a recipient of the program. The HUBS Program was there when I needed it. I am grateful for everyday I see.”

In this way, the HUBS Program at St. Ambrose assists seniors in remaining safe and independent in their own homes for as long as possible.