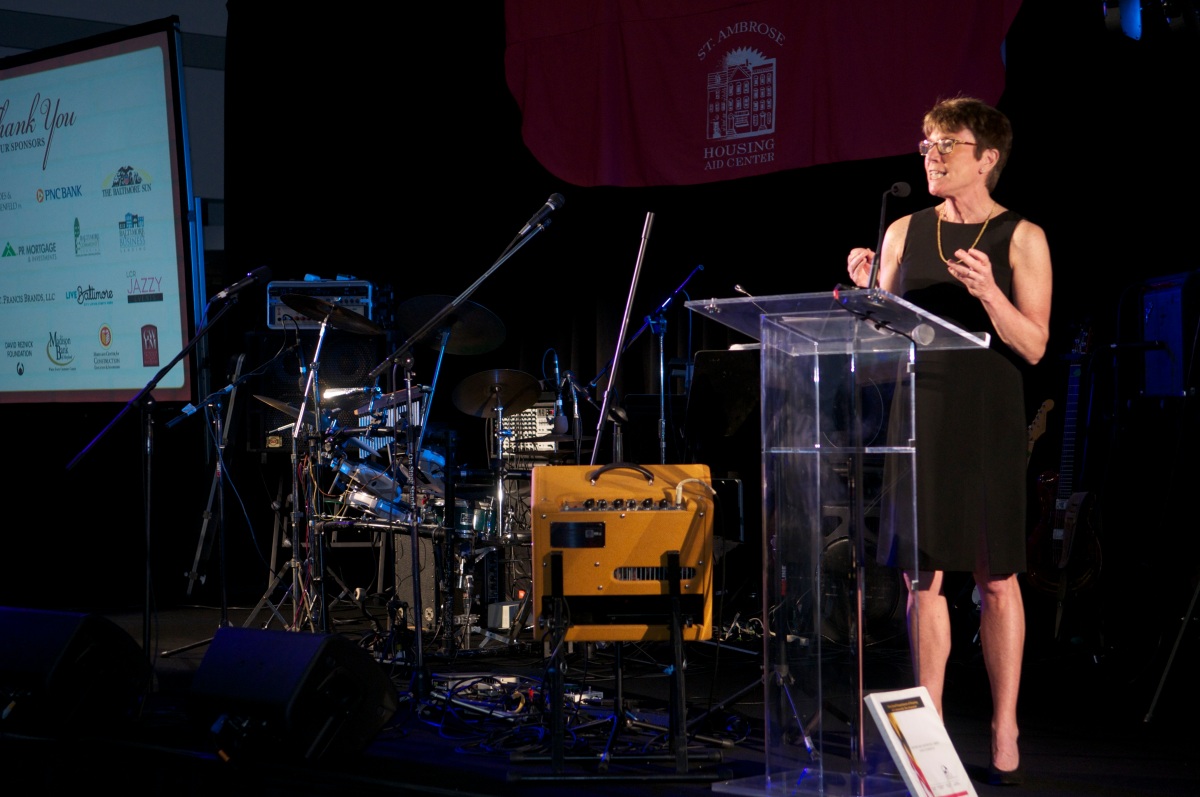 For 50 years St. Ambrose has been a grassroots advocate for the people of Baltimore working to find and keep a home. On Saturday, April 28th we celebrated this long-standing commitment with a special gala. Joined by hundreds of partners, supporters and friends we recognized the many achievements made to preserve affordable housing in our city.

With Jayne Miller as our Mistress of Ceremonies and special remarks from Secretary Kenneth Holt and Harry Spikes, we had the opportunity to look at the future of housing for Baltimore, as well as share in some of the highlights of St. Ambrose’s history. This all came together in the premiere our 50th anniversary celebration video, which you can find here.

Thank you to everyone who was part of this celebration. Through our entire 50 year journey, we have been aided by so many people and organizations. We would not have been able to serve the Baltimore community for so many years if it were not for people like you who have been a part of our mission. Together we will continue to make Baltimore home. 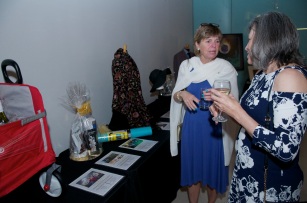 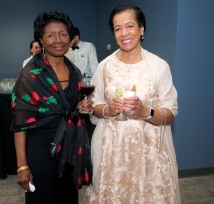 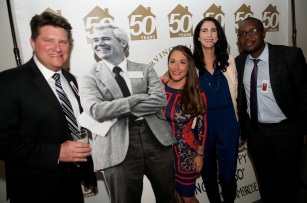 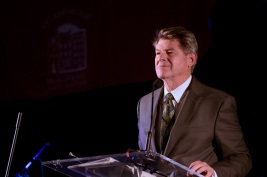 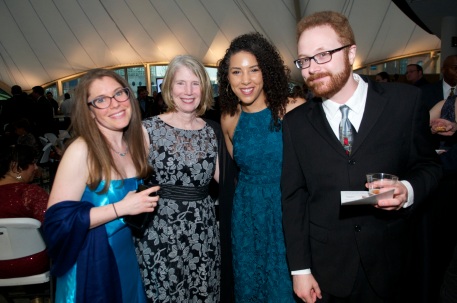 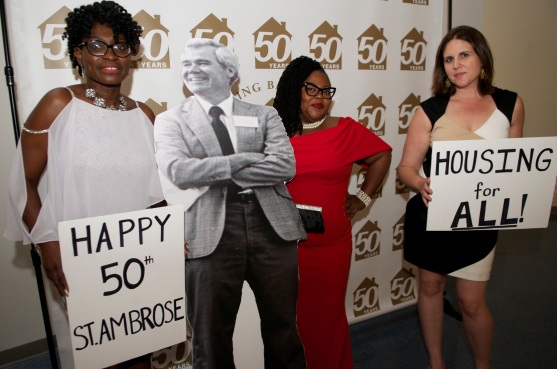 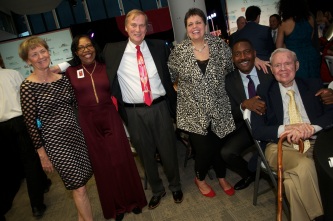 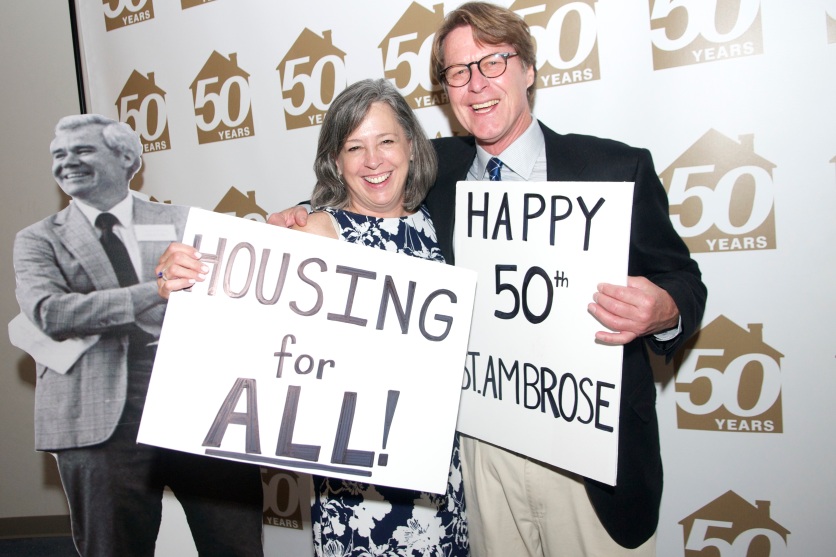 St. Ambrose is a member of the NeighborWorks Network. NeighborWorks America is a congressionally chartered organization that supports a network of 240 organizations across the nation who share a collective vision of building strong communities and creating affordable housing opportunities.

In late July NeighborWorks staff and network members gathered together for a peer sharing of lessons learned and best practices from our work. It was a reunion of the Northeast and Southern regions of the NeighborWorks network and Baltimore had the special privilege of playing host to this diverse and driven group of housing and community development leaders.

While enjoying the conference and learning from our peers, we connected with a few of the attendees to find out what they learned at the meeting, and what they loved about Baltimore!

Something you’re excited to take back to your organization?

There are so many things that I have to take away, but especially being more organized. I know that I can save so much time with an editorial calendar and making the time to create a plan will be a big help in the long run.

Something interesting you learned in Baltimore?

Learning about how eHome America started. I knew some of the founders of the program, but I didn’t know how everyone was really brought together to make it happen- that was really cool.

Favorite meal or experience in Baltimore?

Eating in Little Italy and coming out to see the lights strung up around the neighborhood. Walking around the harbor, watching the paddle boats, stopping by the World Trade Center for a moment of Reflection at the Sept. 11th memorial.

Best thing about the NeighborWorks convening?

New connections! Networking with peers and understanding how each other’s shops work was extremely beneficial. I’m leaving with names and email addresses of people I can continue to connect with when I get back to my organization.

Thanks to everyone who came out for our Stoop Storytelling Event! We had a wonderful time reflecting on St. Ambrose stories, both new and old. If you missed the event, we have some good news! We’ll be sharing the Stoop Stories in our 50 Stories in 50 Weeks campaign to commemorate our 50th Anniversary.

What’s the 50 Stories in 50 Weeks Campaign? Each week for 50 weeks we’ll publish a new St. Ambrose Story from the last 50 years to highlight the people and places that have made St. Ambrose the organization it is today. The stories can be found at Stambrose50.org. You can even submit your own story if you have one to share! 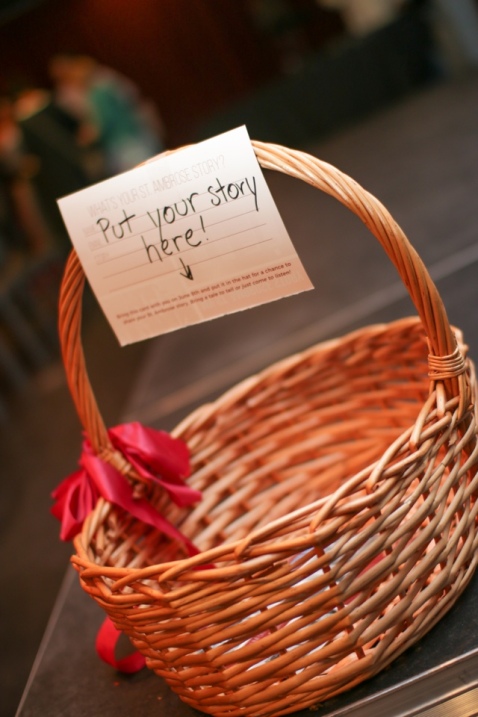 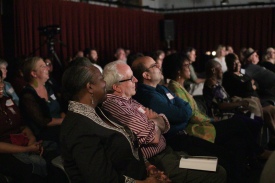 This June 8th, St. Ambrose invites YOU to join us at the Motor House to tell one true and personal story about the impact (little or big!) that St. Ambrose has had on your home or your community. Bring a story to share or just come to listen! Thinking of telling your St. Ambrose story? Here are 5 tips to help you prepare:

Tickets to the event are $25 and include a complementary happy hour at 6:00 PM followed by the Stoop Storytelling show and dessert. You can purchase tickets here. If you have any questions about the event, contact Carla at 410-366-8550 x 245 or email carlah@stambros.org.

St. Ambrose Housing Aid Center is a member of Community Development Network of Maryland (CDN). CDN is a group that represents the interests of housing and community development organizations across the state. Although Maryland communities are diverse in so many ways, CDN unites community organizations on our shared goal of making our communities great places where people can thrive and have access to opportunities. The network gathered in Annapolis to meet with legislators and discuss some of the pending legislation this session that could improve and strengthen our communities.

We heard from law makers and had the opportunity to connect and share our on-the-ground experiences as community development professionals. By providing testimony and education about how Maryland laws impact our clients, we can be confident that our legislators have an educated perspective to make decisions that will strengthen communities and people. Below are a few of the highlights from our state legislators and leaders:

House Appropriations Chairwoman Maggie McIntosh discussed the necessity of housing and addressing poverty if we are to expect strong education outcomes. Delegate McIntosh also emphasized the importance of passing the HOME act during this session to end discrimination in housing based on source of income only.

Land Use and Ethics Sub Committee Chair Steve Lafferty reiterated the importance of the work of housing counselors in Maryland for not only foreclosure prevention, but also to prepare Maryland families for the future through homeownership counseling and financial literacy. 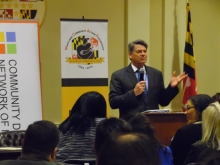 Maryland Department of Housing and Community Development Secretary Kenneth Holt emphasized the bright future ahead for communities across the state and discussed initiatives to reach the state’s goal of eliminating homelessness.

If you’re interested in learning more about the Maryland government and the general assembly, check out Maryland Manual Online .

If you’re interested in learning more about the work of Community Development Network check out their website here.

We’re lighting up N. Charles Street to Celebrate  #GivingTuesday – and we need your help!

We’ve joined #GivingTuesday, a global day of giving that harnesses the collective power of individuals, communities and organizations to encourage philanthropy and to celebrate generosity worldwide.

Occurring this year on November 29, #GivingTuesday is held annually on the Tuesday after Thanksgiving (in the U.S.) and the widely recognized shopping events Black Friday and Cyber Monday to kick-off the holiday giving season and inspire people to collaborate in improving their local communities. 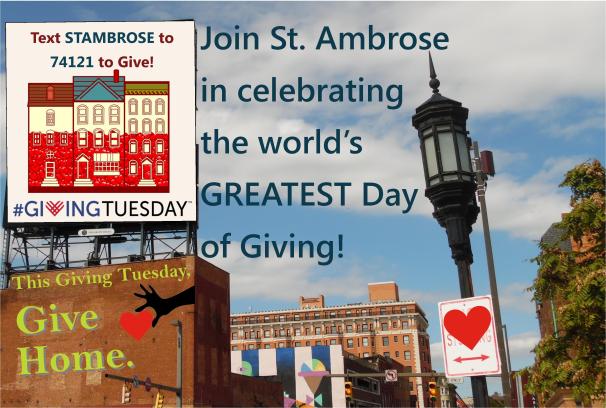 The centerpiece of St. Ambrose’s #GivingTuesday celebration is a display on Baltimore’s giant LED Board located at 1700 N. Charles Street. The LED Board, which is the largest on the East Coast between New York City and Atlanta, will track progress towards our giving goal from 6-8pm on #GivingTuesday and will be updated to recognize donors who have given to the campaign.

3 ways YOU can support St. Ambrose this #GivingTuesday

We’ll update this post regularly as we get closer to the big day! Thanks for your support and feel free to get in touch with any questions.

If you’ve ever visited the houses on East 25th Street where St. Ambrose is, you’ve probably noted the age of the buildings, but did you know the land is home to some baseball history?

Long before St. Ambrose moved into the space in 1973, the land was home to the National League Baltimore Orioles from 1891 to 1899. What was known as Union Park (Oriole Park III) was one of several locations within a few miles for the team, according to author David Stinson.

On his website Deadball Baseball, the Baltimore author chronicled the history of this ballpark and many others across the country.

Baltimore was unique in that there were six different ballparks throughout the city known as Oriole Park. The land at the time was less developed, with more space to hold a ballpark. The footprint of which was typically around five to six acres, Stinson said.

One of the houses that St. Ambrose (317 E. 25th Street) currently occupies was on the edge of the ballpark. A wrought-iron gate that faces 25th Street was where the snack bar once was.

During their time at the ballpark, the Orioles hosted 30,000 fans in 1897, which was the largest crowd ever in the country to attend a game at that time, Stinson said. It was also 100 years ago in 1894 that that Orioles won their first pennant.

It’s also unique that one of the St. Ambrose buildings is so visible in an old photo of the park. Of the many ballparks Stinson has researched, there are few structures nearby that have remained intact.

In the past year, the houses have undergone significant renovations, including a restoration of the wrought-iron gate.

When the renovations first started, staff were skeptical. However, as the space took shape all were pleased with the professionalism that was conveyed by the clean lines and updated technology.

They have also enjoyed learning about the history of the space and its connection to the Orioles.

Stinson first visited the property in 2004 while working on his website and research for his book. He hopes the space continues to be maintained for many years to come.

“In my mind it’s a historic structure that needs to be preserved and I’m glad St. Ambrose cares about it so much.”

To read more about the history of Union Park and the land where St. Ambrose stands, visit Stinson’s site Deadball Baseball. Stinson is the author of the novel Deadball, A Metaphysical Baseball Novel and will be on hand Monday at St. Ambrose’s Opening Day Open House from 10 a.m. to 2 p.m.

The Bar Association of Baltimore City’s Senior Legal Services Program is proud to announce that it will host its 22nd Annual Law Day for Seniors event:

The event attracts hundreds of Baltimore City seniors every year for informative talks on legal topics pertinent to seniors.  This year, attorneys will be discussing: What To Do When a Loved One Dies, and Landlord/Tenant Issues Facing Senior Citizens.  Additionally, there will also be a Medicare Part D update and a round table “Ask an Attorney” question and answer session for seniors at the event, a “Benefits Check Up” and many resource/referral materials.  Breakfast and lunch provided.

To reserve your free seat at Senior Law Day, contact Jacqueline Jones at jjones@baltimorebar.org or 410-396-5278. Provide your name and number of attending seniors. Group Reservations are welcome. Free Onsite Parking and Handicapped Accessible.

The 22nd annual Law Day for Seniors is made possible through the generous support of Saul Ewing, LLP, The Health Department of Baltimore City, CARE Services, The Maryland Legal Services Corporation and The Harry and Jeanette Weinberg Foundation, Inc.

To register, email Pamela Petty at PamP@stambros.org or call Pamela at 410-366-8550 ext. 222.  Registration is required; continental breakfast and lunch provided.

St. Ambrose staff have made it to the Silver Screen. Featured in the documentary movie American Casino were Stephanie Davis, Cara Stretch, Anne Norton and Lisa Evans.

The Roqoff Crew, some young musicians from the Chesapeake Center for Youth Development, composed and performed music for the film.

St. Ambrose hosted a special screening of American Casino at The Charles Theatre on June 9. Mayor Sheila Dixon attended along with over 200 others to view the film before its release to the public in August.

“American Casino is a powerful and shocking look at the subprime lending scandal. If you want to understand how the US financial system failed and how mortgage companies ripped off the poor, see this film.” —Joseph Stiglitz, Nobel Prize winning economist