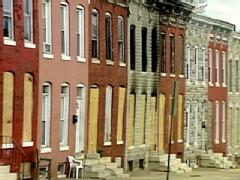 The network apparently asked mayoral candidates to weigh in on the issue.  From what we can tell, they received at least one response, from Frank Conaway, Sr., pasted below:

We need to conduct triage on our inventory of vacant and blighted properties. Properties that are in viable locations should be fixed if they are city owned, or acquired through condemnation if they are privately owned and repaired for occupancy. In areas where the neighborhoods are on the borderline between viability and failure, we should have a broader strategy to acquire multiple properties and rehab them in groups. We need to acknowledge that there are some houses that are not suitable for rehab. These properties should be razed. No one in Baltimore has wanted to deal with this reality, but the truth is that some areas are beyond repair and need to be redone from the ground up.